SUPPORT YOUR FLGS: For all of January, 20% of all sales go to support Local Game Stores. Just name the store on checkout!

The Lost Pyramid of Imhoptep is a 1E module designed for 4-6 adventurers of levels 4-7.

Several months back, a small boy from the village of Ab-Amon happened upon a buried column while playing out in the surrounding desert. He reported to the village elders that the column bore strange and frightening symbols that he, in his youthful exuberance, insisted were curses. Being as the boy was known to have a photographic memory, he was able to accurately draw the queer symbols for the village elders when asked. The elders, being somewhat familiar with the ancient history of their region, quickly came to the realization that the symbols must be associated in some way with a pharaoh, for they were enclosed by a lozenge-shaped border. Perhaps, just perhaps, the local wizard reasoned, the pillar could be linked to the tomb of the master architect Imhotep, whose final resting place has never been found.

Find out more about Expeditious Retreat Press on their Sorcery & Super Science blog.

AA#9 The Lost Pyramid of Imhotep

Sometimes you just want to leap tall buildings and punch villains, other times you want something a ..

Imagine a story of ancient warriors charged with recapturing an escaped demon or a band of modern ..

Intrigued by Japanese folklore? In Fox Magic you play a kitsune, one of the most fascinating creat..

Defying physics and common sense, you are legendary heroes protecting the royal house of 25th ..

The Quiet Year is a map game. You define the struggles of a post-apocalyptic community, and attemp..

By the time they hit adolescence, most people have gotten over their fear of the dark. They spend ..

Sig: Manual of the Primes

THERE IS ONLY ONE TRUE CITYSig is the nexus of the multiverse: a city connected to everywhere, a r.. 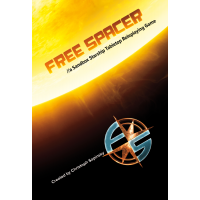 Free Spacer is a sandbox science fiction roleplaying game about the crew of a commissioned starship ..

The Halls of Arden Vul

Prepare to Beard the Halls of Arden Vul! This is the most ambitious megadungeon ever created! ..

Ten years ago, the world ended. Today you’ve been chosen to bring it back.A resistance to the alien ..