It looks like you're new here. If you want to get involved, click one of these buttons!

Wow, CanGames was a blast! Kids games, a new scenario, and a contrasting heroes power levels. And lots of interest and support for our kickstarter campaign. It you haven't yet please consider supporting us to get your copy of Simple Superheroes Issue #0. A big thank you to the 27 backers who have already pledged!

Saturday I ran two “kids” games, one for a group of boys the other for a group of girls (both ages 9-11). The girls battled the Emerald Hawk, stopping her from robbing a charity banquet, and figured out who put her up to it.

The boys stopped a jewellery store robbery and then battled Thunderfist in the Museum of Artifice. Turns out Thunderfist was hired as a distraction by a mastermind seeking to free a diabolical creature from an ancient tablet.

Both of these are micro-scenarios that may find there way into ISSUE #0 if we reach some of our stretch goals.

I’ve always found running Simple Superheroes for kids to be a pile of fun. They have very vivid imaginations and it shows! And a good RPG is all about imagination.

I ran Issue #4 Saving Innocence, which has always been one of my favourite to GM. It ties in a lot of the elements and characters introduced in the previous issues, tells a heartwarming story that often surprises players, and brings Task Force Alpa into the middle of things.

I also ran A Whirlwind of Stone & Flame, set in Tri-City islands of Hanole. This was my new "theme" game. A great place to have aquatic and water powers. A mysterious mystical group known as the Hedge was dabbling in very dangerous elemental magic.

There's definitely some room for improvement in this scenario, but it has great foundation. It also had a cameo with Mindfire -- which is the first time I've run him in convention play. 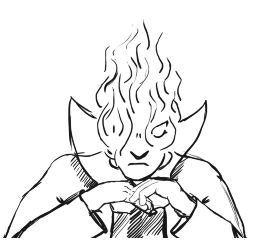 That evening I ran Issue #3 Motorcycles & Lasers. This is the first scenario that really delves into the criminal underworld of New Carthage. Our heroes stuck in the middle of a gang war between the Black Bullets, motorcycle gang carrying high tech gear, and the established criminal organizations. This issue has a lighthearted-ness to it that makes it a lot of fun to run, and it works great for vigilante street level heroes.

The players created some characters that really opened up the narrative. Blackbird (the young sidekick of the famed Nightmaster) had fantastic detective Talent was supported by Taz’s reporter Talent, bought a bunch of the criminal interactions to the for. While Voltage’s hacking abilities and Rune’s relation to Dr. Newton revealed a bunch of information from another side. (Dr. Newton is a key figure in Issue #2)

Sunday morning I ran Issue #1 wherein Professor Adrakis the master of genetic engineering is revealed to be villainous and (in this instance) the government and Task Force Alpha are shown to be not so bad. It’s a great Issue to introduce characters who have just gained there powers and we had several players do just that.

Sunday afternoon I ran a high powered “global” game “The Twisted Legion.” While I love the kind of stories that lower-powered games allow, its really great to “cut loose” and play higher powered games – I think it was the perfect end to a great convention.

I had a ton of fun playing the various copies of Legion, and the story ended with a bang – the heroes ripping apart an escaping alien spacecraft.

Clearly we have a siginificant diversity in power levels across the various scenario's at the con, and all of this is achieved simply by varying the assumptions made at character creation. A longer discussion on this can be found here.